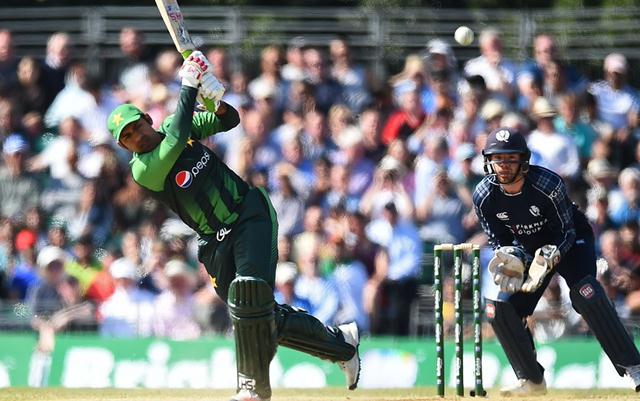 What a fantastic day it was in the history of Scotland Cricket, and for the country itself, as they defeated England in a one-off ODI between the two nations. Playing at the Grange Cricket Club in Edinburgh, the Scottish cricketers not only posted their highest ever ODI total of 371/5, but then also restricted England to 365, winning narrowly by 6 runs.

Bowling all-rounder Safyaan Sharif picked up that crucial last wicket in the penultimate over and he was lost for words (like all his teammates) after this historic win. “Amazing, amazing, amazing day for Scotland and for all the fans that came out and supported us too,” he said.

After missing out on qualifying to the ICC 2019 World Cup, they had a few big games to prove themselves and they began well by upsetting England. Next, two T20s against Pakistan and the first one was played yesterday at the same venue, but it didn’t go as well as they would’ve expected.

Pakistan elected to bat and Sarfraz Ahmed played a beautiful captain’s knock of 89(49)*, with the Scottish bowlers not knowing where to bowl to him. The veteran Shoaib Malik also played a cameo of 53(27) towards the end, dealing only in sixes (5) as Pakistan posted a commanding total of 204/4 in their 20 overs.

Seeing how England almost chased down 372 a few days back, one would know it was a good pitch for batting, but Scotland lost early wickets in the chase which didn’t help their chances at all. They lost their main batsmen and the lower middle order had to contribute as Michael Leask top scored with 38(24)* and Scotland only managed 156/6, thus falling short by 48 runs.