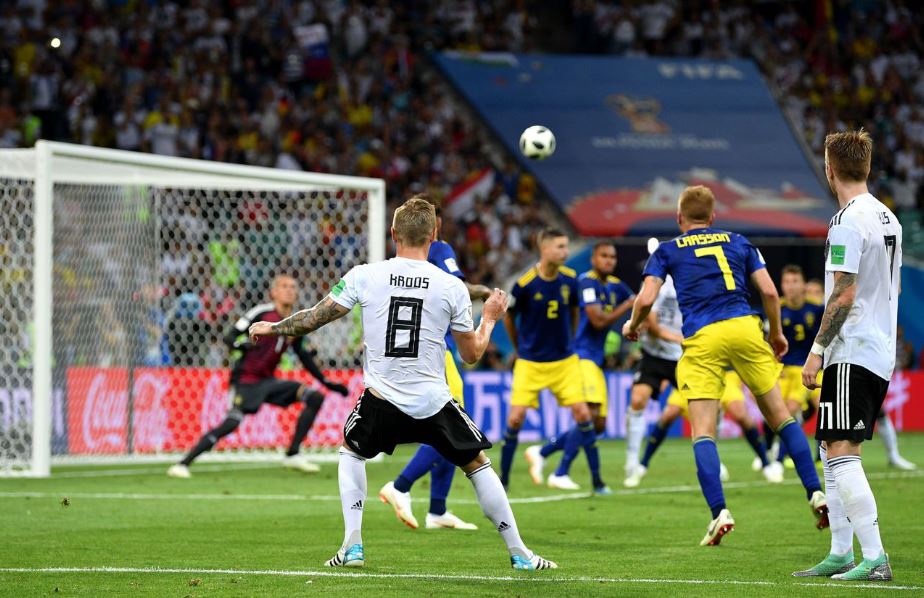 What a fantastic end we saw to this Group F game, as one of the pre-tournament favourites, Germany, just managed to get through against Sweden. For a long duration in the game, Germany were staring at defeat and possible elimination from the 2018 FIFA World Cup, even though they are the defending champions.

However, they came back in what was literally the last minute of the game, to score and scrape through with a win and the much needed 3 points. After their shocking 0-1 loss to Mexico in the opening game, Germany needed a positive result in both their remaining games and that looked highly unlikely when Sweden opened the scoring and took a 1-0 lead in the 32nd minute.

Ola Toivonen scored that goal for the underdogs, lobbing the ball over Manuel Neuer, who is known to be one of the best in the world. Toivonen had 23 Ligue 1 games for Toulouse where he failed to score in the recent season, including 19 attempted shots, but he finally managed to get one through and put his country ahead.

Germany didn’t waste a lot of time in the second half, scoring in the 48th minute of the game, with Marco Reus netting the ball and proving his controversial selection in the team. However, while there were shots on target and a majority of the possession, frustration was creeping in as the clock crossed 80 minutes and the scores were still level.

Germany kept pressing forward, with an amazing 76% of possession and 18 attempts on goal but matters only got worse for them when Jerome Boateng received his second yellow card of the game and was sent off in the 82nd minute. All hopes seemed to have vanished for Germany, but their last chance was a free kick awarded outside the box in the 95th minute.

What followed was a piece of brilliance from Toni Kroos, who completed one of the most amazing set pieces ever. With 5 minutes of stoppage time, this was sure to be the last move and Kroos delivered, curving the ball past the Swedish goalkeeper as the stadium erupted, while the Swedish players fell to their knees. It wasn’t a late finish, but a late, late, late, late finish. 94 minutes and 42 seconds was when they scored, making it Germany’s latest goal in World Cup history. Full match highlights here:

Keep reading GutshotMagazine.com for similar updates on matches at the 2018 FIFA World Cup.