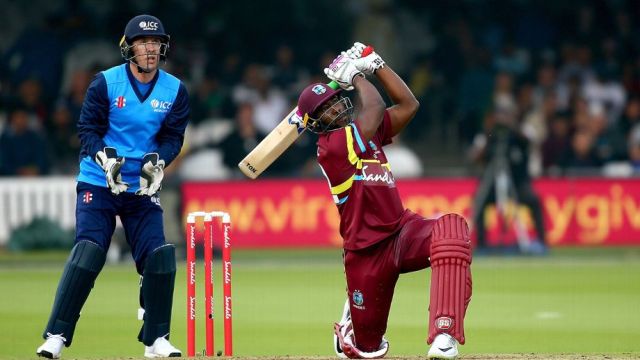 The International Cricket Council (ICC) first put together their ICC World XI team back in 2005 and while this team has always constituted some of the best players in the world, they have had a very poor success rate, having won only two games thus far – an ODI against Asia XI in 2005 and a T20I against Pakistan last year.

Recently, ICC announced a charity game between Windies and their World XI team at Lords, to raise money to renovate the stadiums in the Caribbean that were damaged due to recent hurricanes. The match took place last night and once again, the World XI team suffered the same fate.

The match was awarded international status and Shahid Afridi was leading the World XI side, replacing Eoin Morgan who pulled out with an injury at the last moment. He won the toss and bowled first, and the Windies batsmen attacked all the bowlers, showing why they are the current T20 World Champions.

Chris Gayle failed but Evin Lewis smashed 58(26), only to be adjudged LBW to the spin wizard Rashid Khan. Marlon Samuels also played a useful hand of 43(22) before he became Rashid’s next victim. After three good overs, Rashid was taken for 24 runs in his final over, as the Windies ended with a very competitive total of 199/4. Denesh Ramdin scored an unbeaten 44 in 25 balls.

There was one thing that the World XI needed if they had to win this game – a good start. However, they did anything but start well, as the top four batsmen scored 2,0,4,0 and they were reduced early to 8/4, with Samuel Badree bowling one of his best spells in T20 cricket and finishing with 3-1-4-2.

Thisara Perera was the lone ranger in their innings, continuously finding the boundaries as wickets fell around him. They were bowled out for 127 and Perera was unbeaten on 61(37)* as Windies won this one-off T20I by a massive margin of 72 runs. Keep reading GutshotMagazine.com for more cricket news and match results! Man of the Match: Evin Lewis.