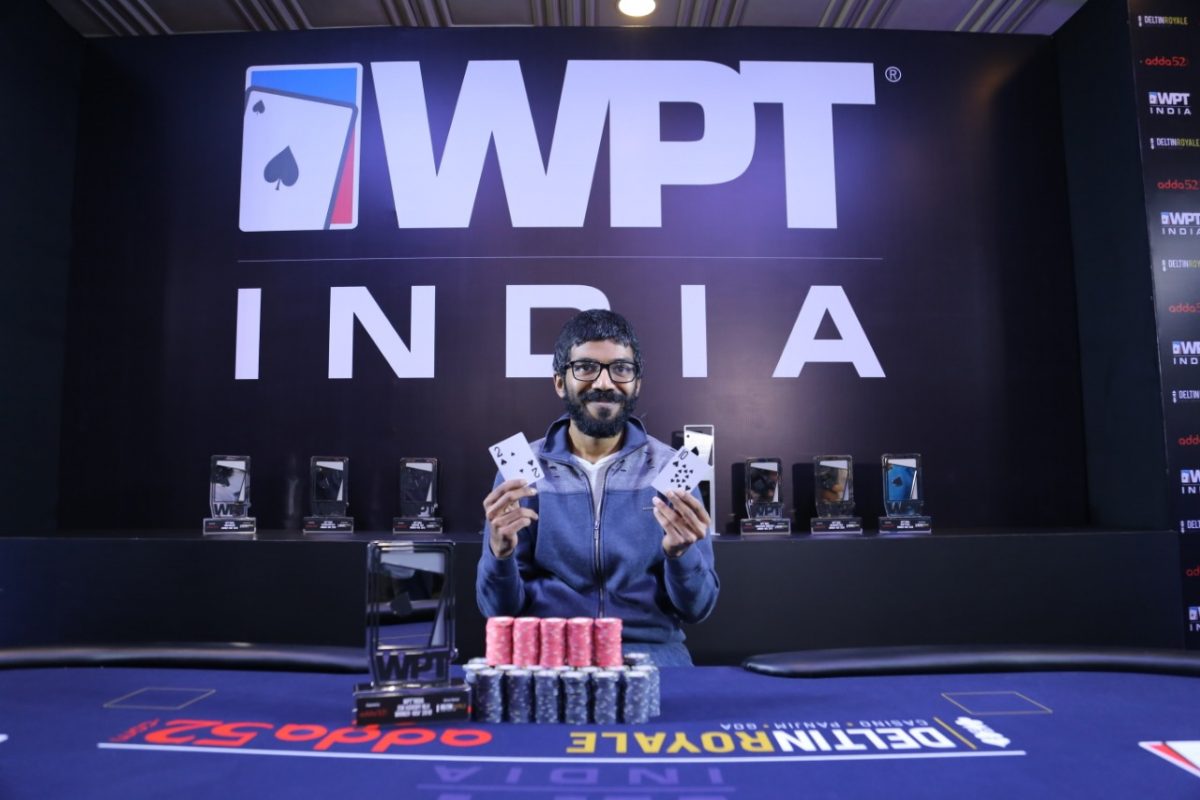 The World Poker Tour (WPT) began their second series in India just a couple of days back and to commence proceedings, the WPT India INR 20k Kickoff Event started on 13th November. A massive participation of 201 entries registered to the tournament with a prize pool of over INR 38 lakh being generated.

As Gutshot reported yesterday, Aditya Sushant ended Day 1 with the chip lead, holding the biggest stack from the final nine players. As players hit the felts at the Deltin Royale in Goa for Day 2 of the tournament yesterday, Sushant managed to ride the chip advantage and go on to win the opening event of the prestigious WPT India series!

The top 26 places finished in the money in this tournament and the pay-outs resumed from INR 93,512 on Day 2, which went to Lokesh Budhiraja, who was the first casualty yesterday, busting in 9th place when his Aces cracked against Ashish Kaushik’s AJo, with the latter completing quad Jacks on the river.

The Chennai based Aditya Sushant had a stack of 773k to begin the day and he had a brilliant run on the FT too, eliminating as many as 5 players, starting with Himanshu Kataria who was sent to the rail in 8th place, becoming the first player to get a 6-figure score in the tournament – INR 1,11,400.

It was Sushant’s day yesterday as his Aces beat Ashish Kaushik’s Queens, putting the latter out of the tournament in 4th place for a prize of INR 2,37,000. Adda52 Team Pro Kunal Patni was also in contention, beginning the FT second in chips to Sushant, but he was knocked out in 3rd place yesterday, with his Ah Js losing to Sushant’s Ax 8x, with the latter hitting an 8-pair on the flop. Patni won INR 3,89,700.

The began heads-up play between India’s WSOP gold bracelet winner Sushant and Abhishek Grover, with the latter starting the FT as the shortest stack. It was a very good effort from Grover to reach this stage, but it was always going to be tough to win against Sushant, who had a 2:1 chip lead at the start of heads-up.

Sushant chipped up and down a couple of times but had the lead before the final hand as well, when the blinds were running 20k-40k-40k. The flop opened 7h 2d 7c and Sushant bet 100k to receive a call from Grover, followed by a 100k bet from Grover after the 2h turn and a flat call from Sushant. Grover shoved on the Qd river card, and Sushant happily called with 2s 10s, completing a full house over Grover’s two-pair, who held Qh 5s.

While Sushant has plenty of achievements in live and online poker, this became his first ever WPT title, as he took home the biggest pay-check of INR 9,35,000 for shipping the tournament. His red-hot form continued just a month after he took down the 35k Baadshah Live Main Event in Goa. As for Grover, his brilliant run ended in second place, collecting INR 6,49,000 for his efforts.

The INR 35k SuperStack event also began on Day 2 of the WPT India series on board the Deltin Royale and you can get all updates of that tournament here on GutshotMagazine.com, so stay tuned for all updates.