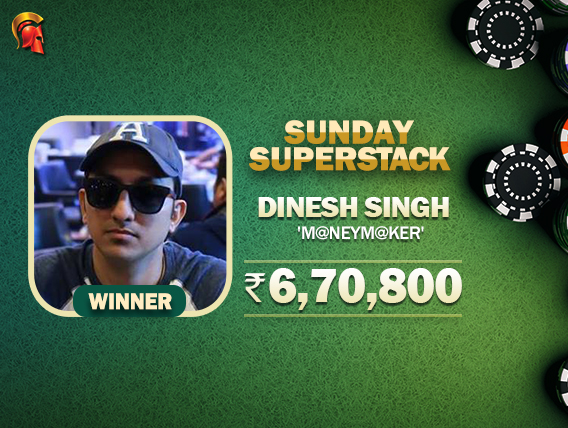 The Spartan Poker seems to be a happy hunting ground for Dinesh Singh, a poker player who has won quite a few online titles on their platform, playing under the name ‘M@neyM@ker’. While he wished to stay anonymous through those smaller wins, the player won a major title last night and didn’t mind revealing his identity.

Singh terrorized his opponents in the September edition of the Spartan Super Series (SSS), where he won not one or two, but three titles through the series, and since then, he has been a major contender in Spartan tournaments. Last night, he boosted his bankroll massively, taking down the Sunday SuperStack tournament.

Sunday SuperStack INR 25 Lakh GTD has a buy-in of INR 5,500 and the re-entry tournament saw a total field of 516 entries joining last night, where several Indian pros took part. As usually witnessed, the guarantee was passed once again, with a new prize pool of INR 25.8 lakh being generated. From these, the top 50 places were paid out a minimum cash prize of INR 12,900.

Now Dinesh Singh isn’t new to winning poker tournaments online, but this victory in particular would’ve made him very proud. He outlasted the massive field for the top prize of INR 6,70,800, after he eliminated ‘THALAIVA AR’ in second place, who collected a pretty decent prize himself – INR 4,12,800.

Gutshot caught up with Dinesh Singh after this victory to congratulate him on his efforts and ask him about the tournament. He said, “God has been kind! I am extremely delighted that results have started coming in my favour. You need to trust your instincts and play for the title win because the cherry is always only at the top. This is my biggest win till date, and there are hopefully many more to come. I ran good at the later stages of the tournament. Big shout out to all the close friends who have been at my side during my thick and thin.”

Talking about his poker from here on, he said, “It’s still early days for me and a long way to go. I will try to keep learning and improving my game.” We’ll keep following Singh’s progress and report all of his major victories, so keep reading GutshotMagazine.com for more updates on the same.